On Monday, June 6, Apple is organizing its annual developer conference, WWDC 2022. The goal: Introducing upcoming software features, particularly on the iPhone with iOS 16. Redesigned lock screen, ApplePay Later, new CarPlay… Apple’s next operating system , which will be published in September or October, will arrive with many new features.

To start off its keynote, Apple announced the biggest lock screen update in iPhone history. With iOS 16, it will be possible, for the first time, to change the font and color of the time and date displayed on the screen when the smartphone is locked. In addition, the main screen image may introduce a depth effect. It will also be possible to add widgets, such as weather or calendar, directly on the locked screen.

in the same category

Apple makes customizing its home screen very simple: just tap on it to access the editor that allows you to tweak it; There will also be the possibility to create multiple lock screens and change them automatically during the day. The Cupertino company has made sure to provide different image galleries so that users can choose the visuals they like the most, with access to millions of different combinations. Finally, just swipe to change its home screen. 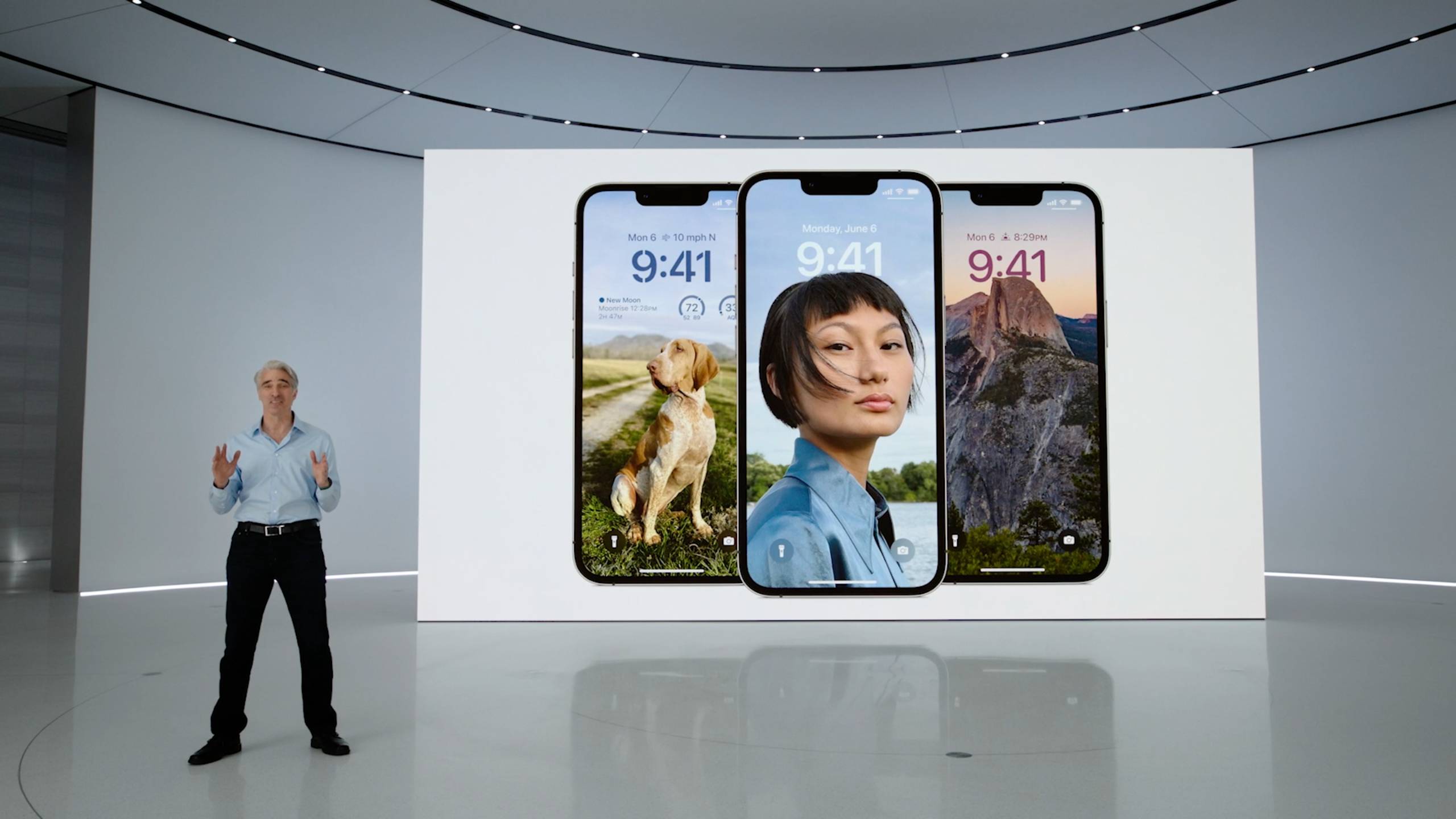 iOS 16 will allow you to customize the locked screen. Photo: Apple

With Live Activities, Apple wants to allow its users to follow live events through a simple widget; It could work with a soccer game, or track the arrival of an Uber or its delivered food. Also, notifications will be displayed differently so that they do not take up all the space on the redesigned locked screen, and will appear from the bottom.

Introduced at WWDC 2021, Focus allows iPhone owners to better manage their notifications and how to access them. With iOS 16, this functionality will be further improved: it will be possible to associate a specific focus with the lock screen, but also to apply focus filters according to applications, which makes it possible to achieve an optimal balance between the arrival of notifications. 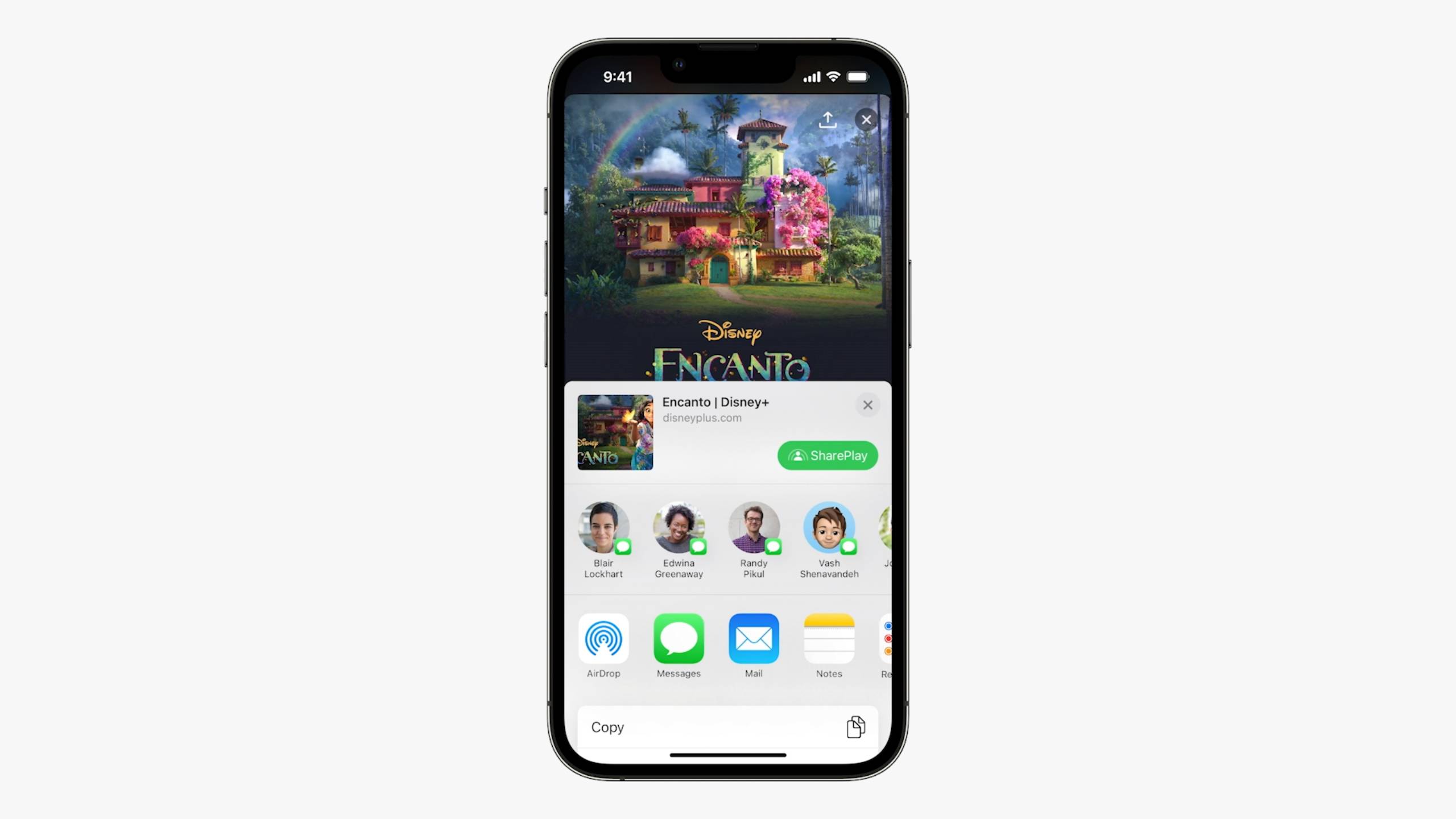 Evolution of the messaging app

These features will surely be welcomed by many iPhone users. With iOS 16, it will finally be possible to edit a message after sending it, or simply unsend it.

SharePlay is coming to Message

SharePlay, a feature used 18 billion times a month since its release on iOS 15, is coming to Message. So it will be possible to enjoy simultaneous content such as movies or songs and shared playback controls while chatting in messages.

Also, it will be possible to crop photo elements and send them directly to a loved one in the Messages application.

With iOS 16, it will be possible to seamlessly switch from voice to touch. Users will be able to type using the keyboard, type in the text field, move the cursor, and insert QuickType suggestions, all without having to stop dictating. Dictation will also provide automatic dictation of punctuation in addition to emojis.

iOS 16 allows you to pre-register your ID card. Photo: Apple

Apple will allow you to pre-register your ID in the Wallet app. This in particular should allow you to give your data directly to an app that requires it, like AirBnb for example, without having to scan or take a picture of a document.

To ensure a private and secure experience, only the information necessary for the transaction will be submitted to the app, and the user can verify it and agree to share it using Face ID or Touch ID. Also, users will be able to securely share their home, hotel, office and car keys to Wallet through messaging apps including Messages, Mail, etc. 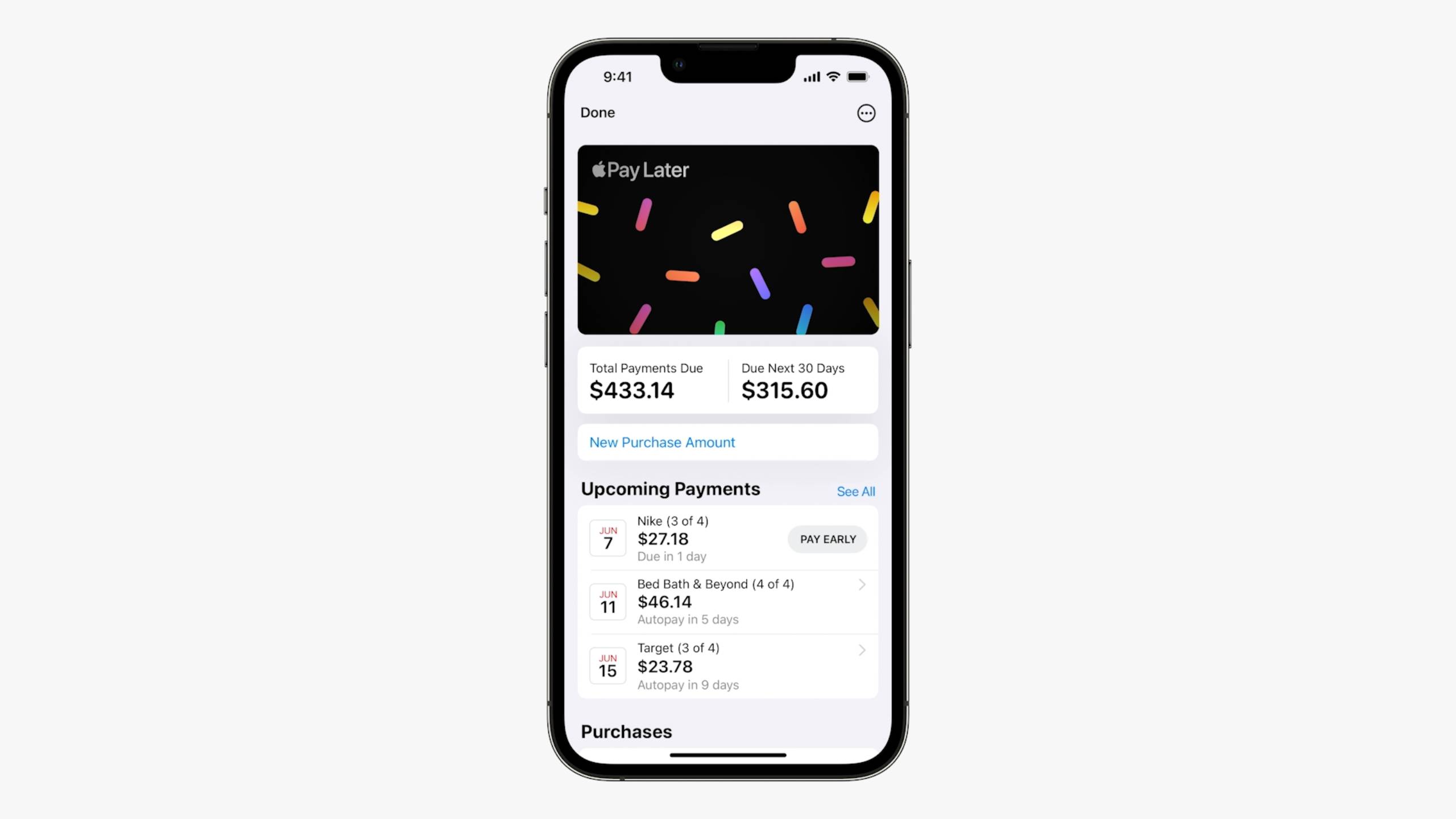 With Apple Pay Later, Apple is getting closer to e-commerce. Photo: Apple

It’s official, Apple is doing split payments. With Apple Pay Later, it will be possible to pay for a product in installments, which is a very useful feature for the e-commerce sector; Furthermore, the Apple brand will launch this tool through a partnership with Shopify.

Payments will be displayed directly in Wallet thanks to a modified summary page which will allow viewing, tracking and payment. Apple Pay Later can be selected as an option when paying with Apple Pay. 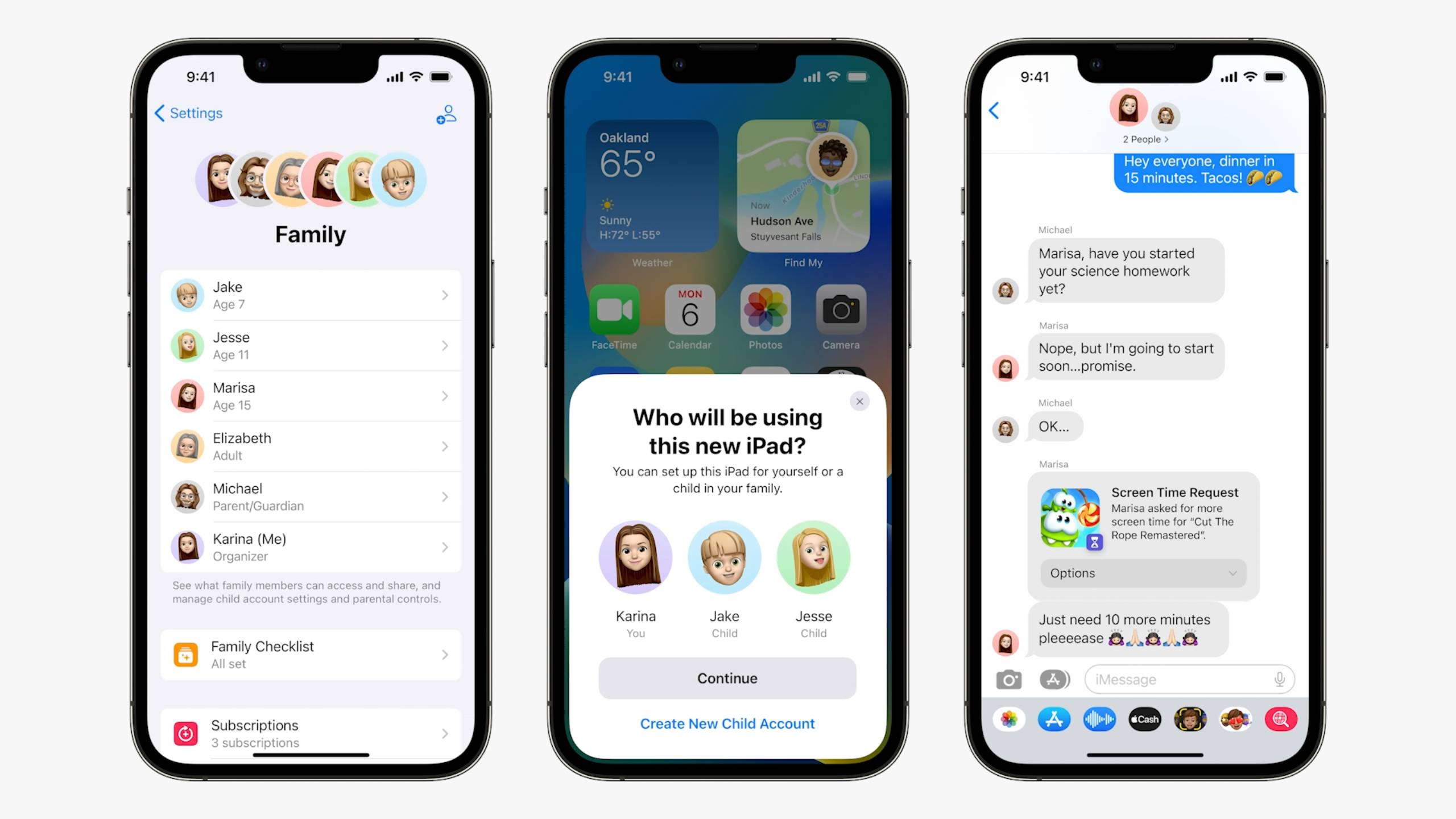 Apple is investing more and more to support families

With Family Sharing, Apple wants to strengthen parental controls. This feature provides an easier way to create an account for a child with the right parental controls right from the start. It includes suggestions for age-appropriate restrictions for apps, movies, books, music, and more, as well as an easier process for setting up a new device that automatically applies existing parental controls.

When a child requests more screen time, guardians can approve or decline directly in messages. Another feature is creating a family checklist with helpful tips, such as how to update your child’s settings when they grow up, how to activate location sharing and information about how to share your iCloud Plus subscription with everyone.

Created with organizations that combat domestic violence, the security check allows victims of violence who have shared their personal data with their partners to quickly delete this access.

It includes an emergency reset that helps users easily sign out of iCloud on all their other devices, reset privacy permissions, and restrict messages to the device in their possession. It also helps users understand and manage the people and apps they have allowed them to access and stop showing their locations.

With iCloud Shared Photo Library, it will be possible to share photos with loved ones automatically thanks to a separate iCloud library that up to six users can collaborate, contribute and enjoy.

So users can choose to share existing photos from their personal libraries, or based on the start date or people in the photos. A new button built right into the Camera app will automatically share a snapshot that has just been taken.

In addition, users will receive smart suggestions for sharing a photo that includes participants from the shared photo library. 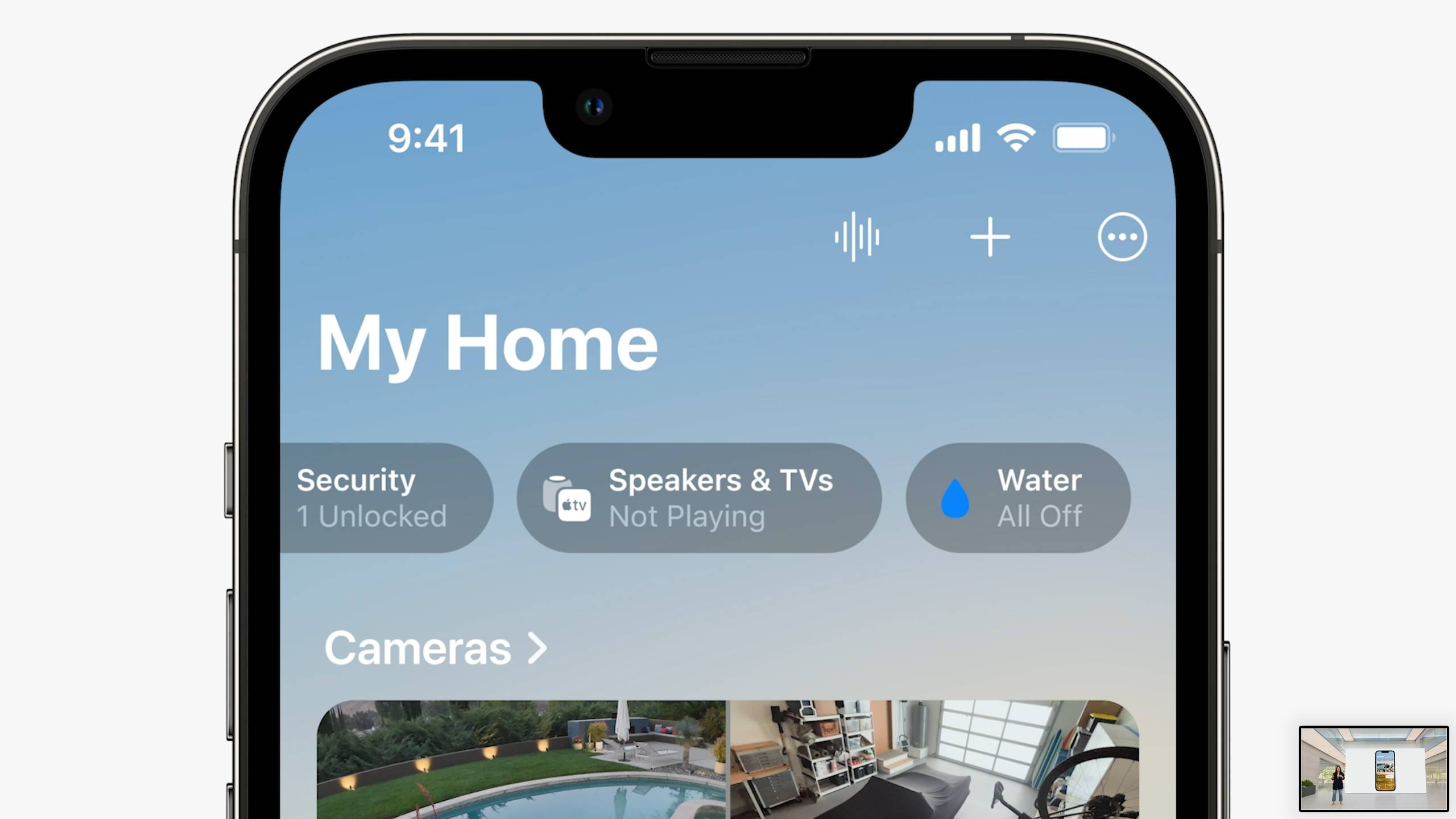 The Home app is being improved to be more fluid. Photo: Apple

Home automation is getting a makeover

The new Home app will appear with iOS 16. In the program, there is a flexible program that will make it easier to navigate, organize, display and control accessories better.

Apple also announced that the iOS 16 update will bring support for Matter, a connected home connectivity standard approved by many tech companies. It will allow a variety of accessories to work together seamlessly across all platforms, helping to build the true vision of the smart home, says Apple.

This is perhaps one of Apple’s most interesting announcements. In fact, CarPlay will undergo a maneuvering update with an innovative design that immerses more in the future of smart cars.

Apple promises new announcements about it at the end of next year, and makes it clear that many manufacturers such as Ford, Nissan or Jaguar Land-Rover already want to integrate it into their systems. 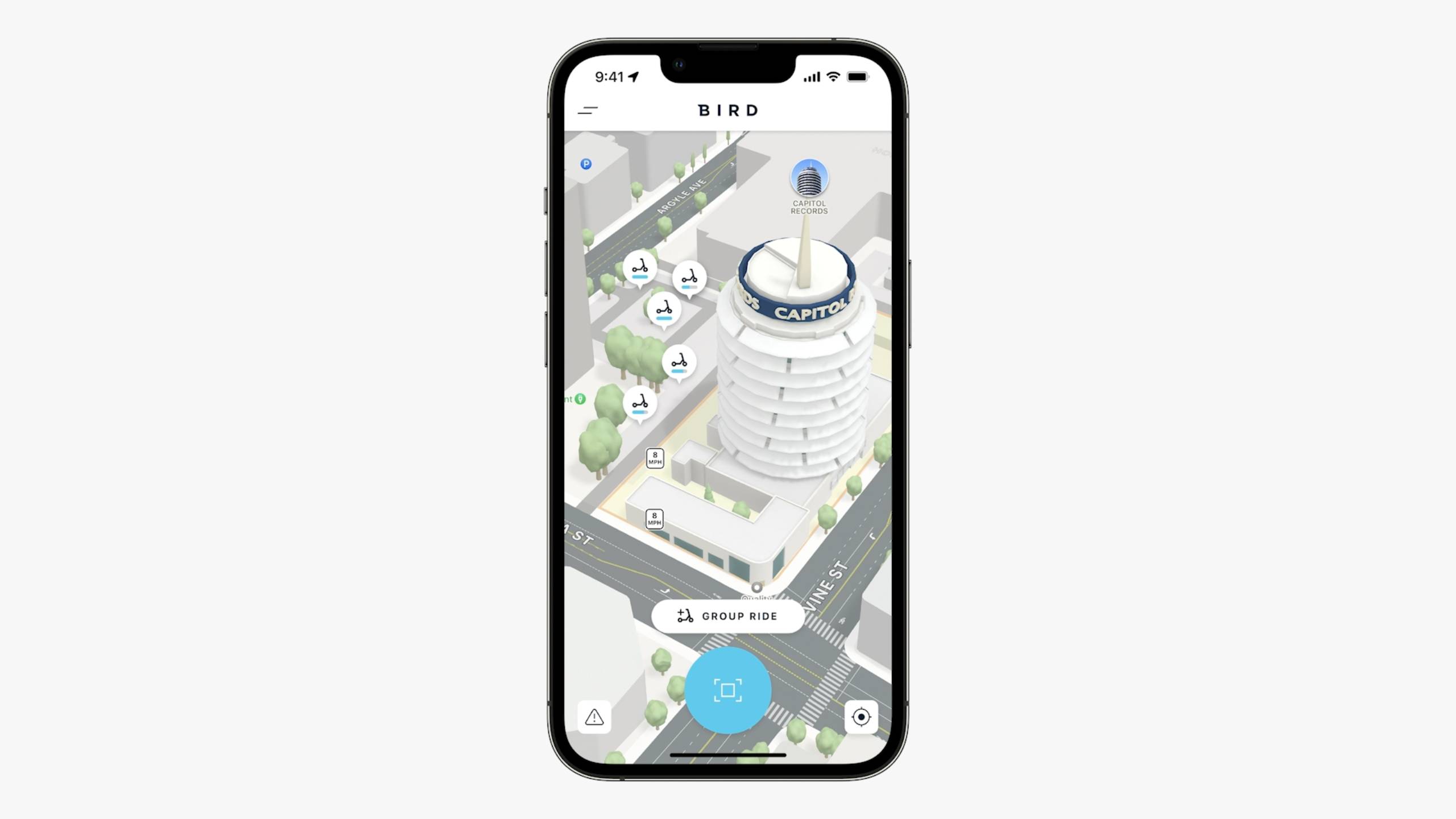 In addition, the Apple brand announced new features in Live Text, but also Tap To Pay, which allows you to pay between two iPhones to stores without additional devices. This function can also work with a credit card, as the iPhone becomes a payment terminal.

The Map app will also undergo a major update to look more like Google Maps, and Apple has announced important new features for Apple News across the Atlantic. A new Sports section will be introduced there, making it easy to follow your favorite teams and leagues, to receive articles from hundreds of leading publishers.

In addition to tweaking the design of its operating system, this year Apple decided to bet on connectivity and sharing. iOS 16 promises very interesting new features and continues the momentum of its predecessor with more customization capabilities, an aspect that the Cupertino company had previously set aside.