My job is made up of the little and unexpected things, of those moments that tend to disappear, in the uncontrolled world of control we’ve built. In my field at dawn, there was frost on the grass. I didn’t expect that, judging by the weather forecast. I had forgotten the existence of the river at the edge of the plot. Seeing the frost-scarred pumpkin made me feel like a student learning to read and stumbled upon a word. “ river ». A simple word whose meaning I had forgotten by the farmer. In fact, I do this work to survive childhood and learn the language of plants, clouds and rivers.

I was picking spinach in the field when the drops started falling. There was a cry, and a heavy rain was brewing. I rushed to the benefit. I could hear rain chimes on the metal roof. This morning I put coffee in a thermos. I drank it in the car. It was still hot.

After the rain, I went back to the harvest. The spinach was wet, and I pressed my fingers against the stems in a quick motion. Funds piled up. At the end of the line, I switched to the heavier chard. The movement of the arm towards the ground, and the rib comes out with the sound of crushed newspaper. Each vegetable in its own way. Some value intensity, as if they want to keep warm or whisper secrets, and others need distance. This should not be disturbed. For everyone to thrive, it is necessary to know the personalities and peculiarities.

One summer evening, I was finishing up planting cabbage by the headlight. The weather forecast predicted overcast weather for a few days, and I didn’t want to miss the chance of my plants recovering smoothly, especially in the middle of summer. Two hours after planting, my back bent, I wanted to stretch a little, and I saw the eyes of an animal on the edge of the field, dazzled by my lamp. He didn’t move, and was staring at me. It was a fox, surprised to see me at such a late hour. Usually, he had the freedom to act for a long time. After a period of silent exchange, I returned to the mission. The fox continued to observe me without disturbing my work. I am happy with this joint life with magpies, tits or foxes. But sometimes I run after imported cabbage worms, clip a wireworm between my fingers, or trap mole rats which I then give as a wedding present, weasels or snakes.

However, there is one small mammal that I avoid catching, it’s the mole. Last week, I watched underground galleries parallel my rows of carrots: Where mole rats had already abused the crop, these straight lines never veered to bite a carrot. Was it a house mole, protecting my flock of umbelifera from wireworm attacks, this beetle that does great damage to the roots ? Was a trained mole, able to help the market gardener like a sheepdog ?

You may not know it, but peasants are spiritists who talk to plants and animals as if they were part of the same world. Peasants have languages ​​that belong to their farms, fields, and lands. These languages ​​are rarely taught in schools or universities. However, they still talk to each other in the countryside, where every place, every rock, every river has a name. Where animals that live in stables, such as those that live in brush, have ways of being that the inhabitants know and identify with.

These multi-specific languages ​​are spoken between human and non-human users in a common environment. The poorly polished countryside words, which we ignorantly associate with a lack of culture, are actually a sign of another culture, another language developed by centuries of companionship with formidable nonhumans. Grass, rivers, stones, trees, paths, whiskers, trails, droppings. Peasants, women and men, carry the words, expressions and languages ​​they compose by creating a dialogue between the savage world and the domestic world. They are building a language with a diverse non-human crowd. They do this work without knowing it. The new peasants, and I am one of them, are but the urban translators of this language of mountains, orchards, and meadows.

In this writing, I do not claim to master this language, nor even to discover it. My aim is simply to recall that traces of the wilderness can be found at the edge of peasant cultures, and to ask a thorny question: How does it happen that when we see biodiversity collapse, we are deaf to the collapse of the peasant world, like if these two worlds are alien to each other ? 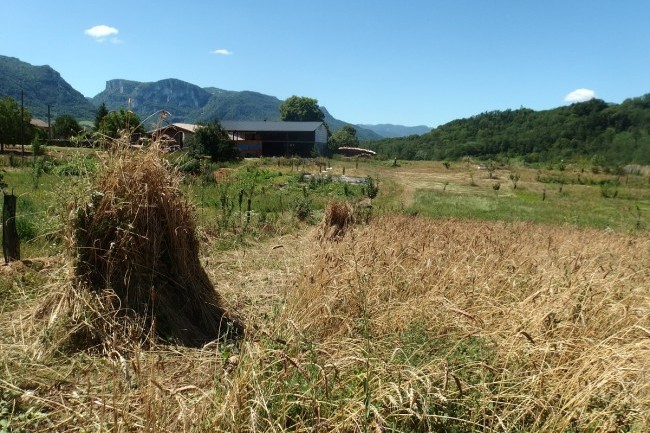 How to become an organic market gardener